TOP 5 of my favorite Chinese dishes

It’s been nearly 3 months since i’ve been in China and i’ve got round to tasting many local chinese dishes from Sichuan. Today i’m about to attempt to write an article about the chinese dishes that i’ve appreciated the most so far. Do not pay attention to the order of the dishes i am going to introduce, because, unlike my favorite DJs’ ranking, here I really can’t rank any dish whatsoever. I preferred ranking every dish according to the amount of information i gathered and their relevance. I also really wanted to do some research beforehand, as a top without any bit of history or any additional information wouldn’t have been relevant at all in my opinion. 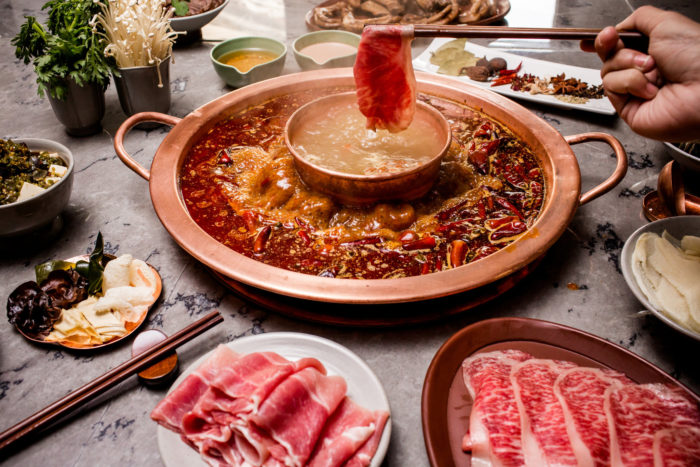 Hotpot is clearly a must in chinese traditional cuisine. This delicacy is basically popular everywhere in China, and every single chinese people may have tasted it at least once in their lives. Unlike any other dishes in the world, raw ingredients are put on the table and you have to cook it yourself, in a similar way than a fondue, which is why French people call it this way. In Sichuan’s Province, we call it « fondue sichuanaise ».

火锅 was already seen as a sign of nobility a very long time ago. During the Han Dynasty (the 2nd Imperial Dyntasty of China) during the 「Great Han era」 (202BC – 9AD ; 25AD – 220AD) and later during the Qing Dynasty (1636-1912) 「Great Qing Era」 –  this dish really became popular among the emperors. Qianlong emperor was notably very fond of hotpot and Jiaqing emperor used to organise banquets with no more than 1550 table full of hotpots. Empress Dowager Cixi enjoyed also enjoy hotpot, especially during winter time.

It was also a way to enhance friendship and unite family members or collegues. Eating hotpot in such a warm atmosphere conveys conviviality, whilst sitting around, eating, and talking about anything.

Lotus root (藕片) 》a good substitue for potato. It’s by far my favorite vegetable. It’s quite starchy and crisp when raw but it becomes softer and flavorful when cooked in hotpot.

Oyster mushrooms (平菇 ) – well known mushroom in most chinese soups. We call it « oyster » mushroom because it is kind of shellfish-shaped. It is very rich and is such a good replacement for meat.

金针菇 (golden needle mushroom) – 【enoki in japanese】very nice ingredient, lower the risk of cancer and is quite high in antioxydants.

嫩豆腐 (soft tofu) – absorb some flavour in hotpot, which is why it is so soft. 冻豆腐 (frozen tofu) – turns yellow-ish when frozen à different taste and texture.

血豆腐 (blood tofu) à Popular in HK, southern China, Taiwan and Vietnam. I was personally joking around when i first saw it and thought it was kind of chocolate（巧克力）ice cream, which made most chinese people laugh. It is quite rich in vitamin C, protein, iron, phosphones, calcium, niancin and other minerals. 亚豆腐 is also quite popular, but duck is getting more and more expensive, and is often replaced by 血豆腐 instead. 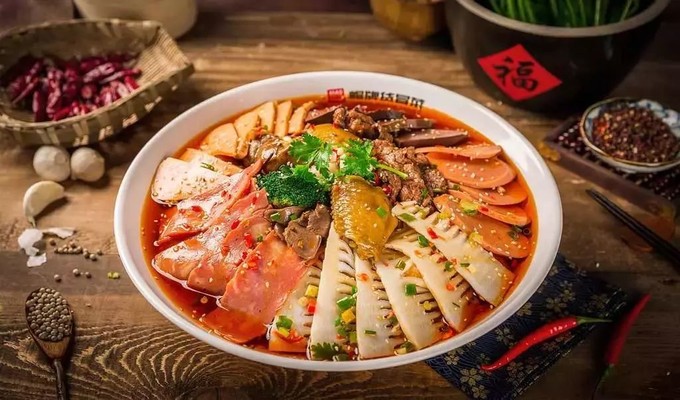 This is one of the typical popular dishes in Sichuan’s Province, especially in Chengdu. I assume it comes from this region of China. It contains a variety of vegetables, as well as some meat / fish. Chinese people use a 麻辣 sauce to cook it, which is quite oily and spicy. Unlike 火锅, this meal is already cooked when served. It’s rather the kind of meal you would eat on your own, rather than sharing it with other people, although i already saw some people sharing it as well, as it is very common in China to share meals with the others.

黄瓜 (cucumber) – while in Europe we prefer to eat cucumber exclusively raw, chinese people like to cook it as well. I also like it this way.

One very good restaurant address for 冒菜 in Chengdu ：竹篓香世家冒菜(川大店) 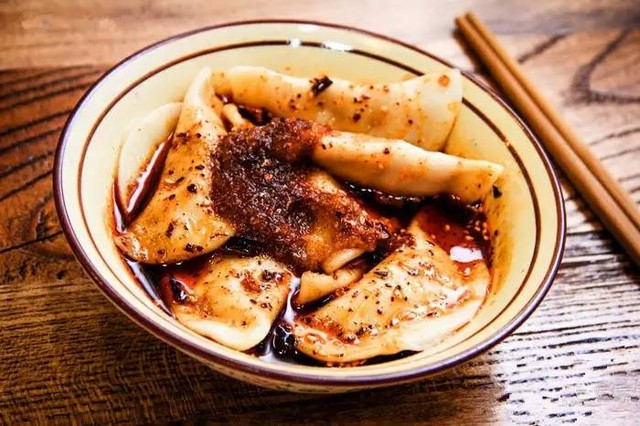 This dish is also very common in China, especially in the eastern and northern provinces. It is the food chinese people eat the most during chinese new year. However, this is also quite popular in other parts of Asia as well as in western countries (i assume those dumplings are not so different than western ones, except for the preparation that is way different) . In Sichuan’s province, 饺子 are cooked and served in a spicy bowl, with black vinegar and/or sesam oil dip. They can be boiled (水餃)，steamed (蒸饺) or pan-fried (煎饺)

饺子 might have been invented during the era of Eastern Han (25-220AD) by Zhang Zhongjing, a traditional chinese medecine practitioner. It was originally referred as « tender ears » （饺耳）because Zhang Zhongjing used it to treat frostbitten ears at that time (people suffered from this sickness because of the lack of warm clothes and sufficient food).

It also came out later in western Han dynasty (206BC – 9AD) and chinese people called it 角 (jiǎo : horn) because of its horn shape, and it was later replaced by the character 饺.

This is another meal coming from Chengdu city (Sichuan’s province). It first appeared in the middle eighties. We call it Chuànchuàn because it is cooked vertically, skewered on sticks (see characters), which makes the food more convenient to be eaten. Chuànchuàn is placed in boiling oil within a clay / iron pot. People from Chengdu love it because of its unique charm and distinctive features. 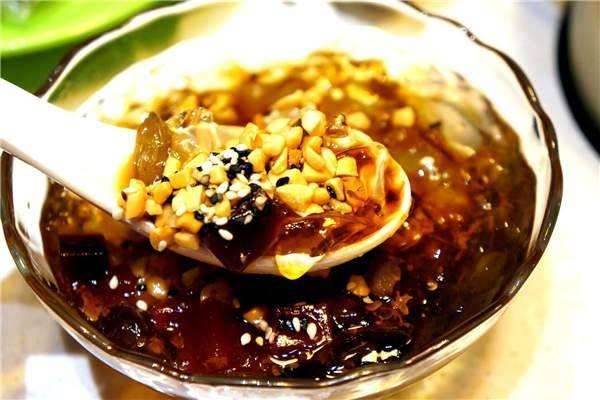 I know that is more a dessert than a meal, but chinese people do eat it often during a meal (such as hotpot) – I also wanted the Bing Fen to be part of this top 5 because i truly love it. The main ingredient is Ice powder seeds, which can be found in ice powder plants. Such plants kind of looks like eggplant plants, and basically grow in middle and low altitudes of mountains, in Sichuan and Ghuizhou provinces, which are pretty famous locations to gather ice powder leaves in order to collect those seeds. Once gathered, the seeds are solidified and water is added to form such a jelly. In addition to jelly, brown sugar, sesame seeds, raisins, hawthorn, peanut shredded and 西瓜(watermelon) are often added in the mix, and it’s pretty delicious.

Bing Fen is a very famous dessert in China mainland, especially in Sichuan’s province, but it started to expand in other regions of Asia such as Taiwan and Singapour.
In Taiwan, we rather used lemon sugar rather than brown one.
In Singapour, some citrus, as well as thin ice and mangoes are added.